A new Image Measurements Application service by DIFFER-ENCE taking advantage of the technology of AI will be re-leased.

About a new technology of our automatic measurements.

We, KONAKA Co.,Ltd. , decided to release our “Automatic Measurements Application” which allows us to measure (For business shirts) by images we take with our phones, cooperating with the Arithmer Co.,Ltd. 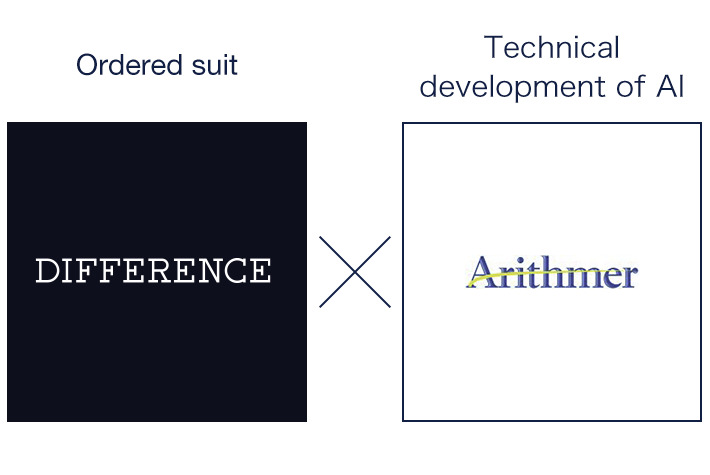 We’ve had the idea for the image measurements since we launched the DIFFERENCE two years ago. At that time, the ZOZOSUIT had not yet come out, and there was no such thing as a tailor. So everyone thought it was impossible to measure clothes by utilizing technology.

Meanwhile, Mr. Konaka (The CEO of the KONAKA Co.,Ltd.) met with Mr.Ota who is a Research Professor of Mathematical Science at Tokyo University, as well as the CEO of the Arithmer Co.,Ltd.

We were so amazed by Mr.Ota’s demonstration of the image analysis and how accurate it was.

His company, the Arithmer Co.,Ltd. has been very active in many fields such as the automotive industry, insurance industry, and the medical industry which he obtained many achievements and valuable experience along the way.

We discussed with him the possibility of using his technology to take measurements by using an image. At that time, there was nothing similar announced in development or already in service, and it was expected that accuracy was quite low.

Therefore, we discussed with him again, but his opinion was that it could be possible but we would need a lot of effort to make it happen to offer the actual service to our customers. What he told us brought us hope.

We welcomed Mr.Ishihara as a technical mentor. 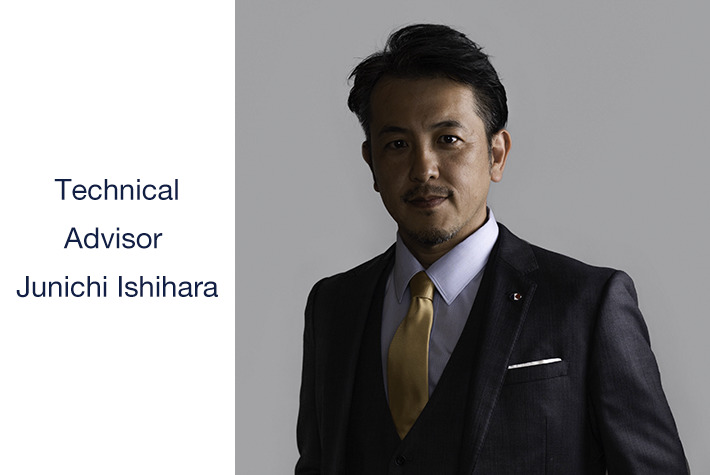 We met Mr.Ishihara through our mutual friend (who assumed the position of a technical adviser).

He is entrepreneur who has multiple businesses. But what fascinated us about him the most was the fact that he was familiar with marketing using AI.

He owns his own robot programing school and he succeeded to have his students make it to the world championship. So we thought his understanding of the difficulty for making the robot work accurately would match our needs, also his approach and way of thinking for manufacturing would be very helpful for this project. So we decided to welcome his as a project leader.

And finally, the Arithmer Co.,Ltd. Who invented a source of measurements, Mr.Ishihara, the DIFFERENCE, and Mr. Buhe from the YouTeacher which is an application development company, these four companies cooperated with each other and started this project together.

Development with difficulties and failures. 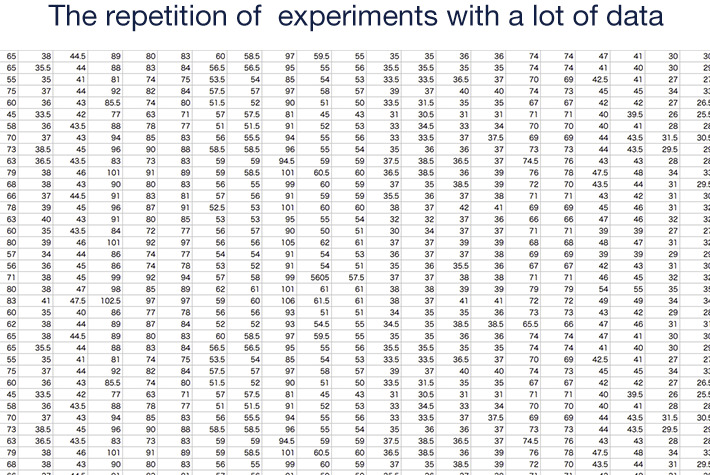 First, we started to collect a lot of big data for AI. Fortunately, we, the KONAKA Co.,Ltd. , is a company who sells business suits so we originally have many tailors and employees. So we succeeded in collecting a lot of data by measuring each other. Also we had plenty of information for the instructors which was needed for starting the image measurements which we’d been collecting since our ordered suits brand DIFFERENCE was launched. We tried to calculate the dimension of the body from these data we collected using AI which the Arithmer Co.,Ltd. invented, but it did not turn out the way we expected. At our very first experiment, there was 5cm difference and it did not even reach the level we could offer to our customers. We kept failing again and again.

While we were struggling, the ZOZOSUIT was released. We thought “Oops, they beat us to it.” and felt like we reached dead-end. Their method of approach was different from ours, but we were thinking the same thing. And the ZOZOSUIT seemed actually very cool. It was a very advanced suit which had a sensor just like a color timer and it reminded us of a future clothes style. It is actually form-fitting and fits a lot like the suit of Ultraman. We can measure our body size using our phones by actually wearing the suit. And the accuracy was far higher than the result of our experiment.

It did not turn out the way we hoped even though we tried so many times. The more we failed, the more we panicked. We started wondering if this challenge was a rash scheme for us and doubted whether that day would come eventually.

But in this difficult situation, professional tailors from DIFFERENCE including its general manager Mr.Nakajima succeeded in inventing an innovative measuring method.

Generally, there is a prescribed method for taking body measurements. But we assumed that we might not get accurate data with it. So Mr.Nakajima ended up inventing a new measuring method for AI and it broke the mold. We saw a dramatic improvement in the overall accuracy after sending Arithmer Co.,Ltd. the data measured by this method.

The Release Date we were particular about 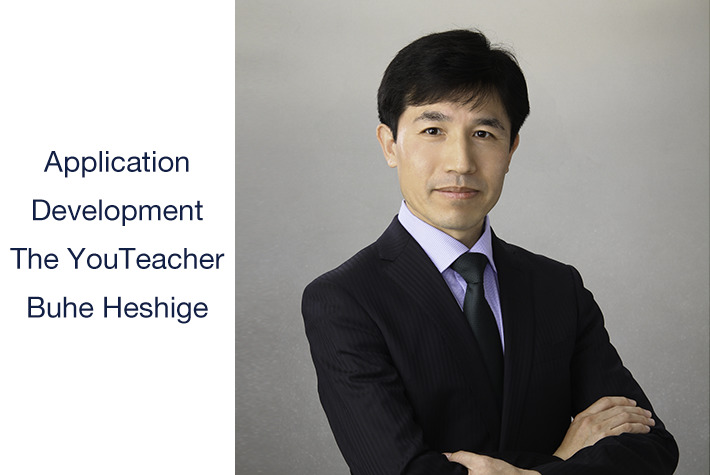 The KONAKA Co.,Ltd. instructed us to stick to release the service within October, 2018, because they believed that this technology would become more common within the next year, especially since the ZOZOSUIT was released and the apparel industry around the world had become amazed by their idea. They also believed that every apparel maker would soon end up offering similar measuring methods using AI, so we believed it would be beneficial to follow the growing trend.

Therefore, they decided to set the release date first, regardless of the progress made in their technical development. The decided release date was October 29th, 2018. The day was approaching moment by moment, and yet we were having a hard time finishing development. Despite everyone involved feeling rather frustrated, we finally succeeded, all in thanks to a CEO within the application development corporation, Mr.Buhe of Inner Mongolia’s. His dedication and contribution of ideas helped us catch-up significantly, allowing deadlines to be successfully punctual. It was in that period of time that he saved us, ultimately averting a crisis.

We released the image measurement application this time, but we thought this kind of technology would become more common in the near future. We feel that the achievement the Start Today Co.,Ltd. made was significant. They took the lead and succeeded in expanding the possibility industrial development.

We will be trying our best to improve accuracy of our service in order to catch up with them. We believe that this kind of healthy competition stimulates the industry, and also helps us offer a better service to our customers. The image measurement application is still in development, but in the nature of AI, the more people that start to use it, the more accurate it ultimately will become. We are enthusiastic and proud in our belief that we will be able to offer you a service leaving everyone involved extremely satisfied within the near future. We really appreciate your continuous support.

•A Research Professor of Mathematical Science at Tokyo University.

A CEO of the Arithmer Co.,Ltd.

I am very appreciative for the KONAKA Co.,Ltd. giving us such a wonderful opportunity this time. When we got the offer from them at first, we felt it was a difficult challenge, but thanks to those top tailors and whomever helped us along the way, we were able to have it developed. We will continue developing and improving ideas using advanced mathematics.

•An advisor of the KONAKA Co., Ltd.

I was so honored to be part of this challenging project with them. Meeting those amazing project members and working with them was the most irreplaceable experience I have ever had. I enjoyed working on this project, and it was my pleasure to be involved. Although this application is still in development, it is consistently-evolving, and I will do my best to offer you all better service in the future.

•A CEO of the YouTeacher Inc.

I am so honored people including the President, Mr.Konaka and the Technical Advisor, Mr.Ishihara trusted me enough to assign me this amazing project for one of the world’s most advanced technologies using AI. We will keep trying to offer you all our amazing technology which helps you to have such wonderful experience taking advantage of our knowledge, and over-200 achievements in developing applications.

Thanks to our customer’s continuous support, we were finnaly be able to have our 2 years anniversary. We got to work with those top tailors from DIFFERENCE seeking the new measurements method, so we believe this experience will help us to offer better clothes which match our customer’s needs. We will continue evolving to be able to offer you such convenient, innovative and fun experiences for ordering in the future.